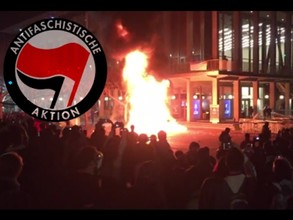 (San Francisco, Ca. August 29, 2017). Today, Larry Klayman, the founder of Freedom Watch and a former federal prosecutor, announced the filing of a lawsuit against the radical leftist hate group Antifa in the U.S. District Court for the Northern District of California. The complaint, which bears civil action no. 3:17-cv-04864-MEJ, is embedded below and can also be founded at www.freedomwatchusa.org. The University of California at Berkeley, the scene of much of this leftist violence designed to destabilize and tear down our democracy and destroy the nation, was also sued, along with its police department, which have stood by on orders and allowed this violence to be perpetrated. The plaintiff in this suit is Kiara Robles, a young gay woman who simply wanted to attend and listen to a speech by Milo Yiannopoulos, another gay person and conservative commentator, then working for Breitbart News. Instead she was physically attacked by Antifa and its hate-filled leftist storm troopers.

Klayman had this to say: "It's time that those who believe in free speech and non-violence stand up for their rights and not cower to the hateful rhetoric and violence of the left — furthered and supported by the radical leftist media -- which are designed to take down the republic and install a "Bolshevik style" dictatorship. In the last weeks, we have seen that anyone who opposes these hateful and dangerous violent vigilantes — the equivalent of Neo-Nazis, the Klan, the New Black Panthers Party, Nation of Islam and elements of Black Lives Matter -- are shouted down and viciously attacked physically. This lawsuit will fight back and hit against those who are bent on igniting a new "civil war" and in order that the nation, and thus our democracy and freedoms, go up in flames. Kiara Robles was the victim yesterday, but you and your loved ones could be the victims of the likes of Antifa and its comrades tomorrow."