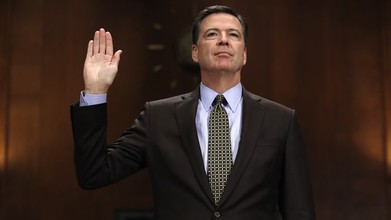 By Larry Klayman, Chairman and General Counsel
Freedom Watch
May 10, 2017
For months, I have been publicizing the failure of former FBI Director James Comey and his General Counsel, James Baker, who should now also be let go, to investigate the massive illegal wiretapping and surveillance on not just hundreds of millions of Americans, but prominent Americans such as President Donald Trump himself, the Chief Justice of the Supreme Court, other SCOTUS justices, 156 judges and others, such as yours truly, who are critical of and advocates against corruption by the government and its officialdom.

In this regard, about two and one half years ago, whistleblower Dennis Montgomery came forward, under a grant of immunity which I obtained for him, to produce 47 hard drives and over 600 million pages of information which he had taken from the intelligence agencies when he was a contractor, to FBI Special Agents Walter Giardina and William Barnett, working under the direction of Comey and Baker. The materials on these hard drives, much of which is classified and which I have never seen, allegedly proves that our so-called government, under the Obama administration in particular, had been violating the constitutional rights of not just President Trump and those around him, but hundreds of millions of innocent American citizens who have neither committed a crime nor been in contact with terrorists at home and abroad.

Federal Judge Richard J. Leon had previously ruled in cases which I personally brought, along with some of my clients and investigators, against Obama's rogue and criminally minded intelligence agencies, the National Security Agency (NSA) and the Central Intelligence Agency (CIA), that this type of surveillance was "almost Orwellian," that is reminiscent of George Orwell's prophesy in his famous novel "1984." It also was akin to what a great film writer and a friend of mine, David Marconi, foretold in his landmark Hollywood film "Enemy of the State," which was produced years before the revelations of another major whistleblower Edward Snowden.

What Orwell and many years later Marconi wrote about was a "deep state" not accountable to anyone or anything, a force more powerful than the President of the United States!

It is no wonder then that James Comey and his pliant underlings, as well as compromised members of the Senate and House Intelligence Committees, have sat on the Montgomery revelations, despite being repeatedly informed of his document production and the testimony, under oath, which he gave for over 3 hours, to FBI Special Agents Giardina and Barnett. While the government is complicit across the board in this cover-up, Comey was the head of the one agency in government at the time that could have investigated and produced clear-cut evidence of this criminality, potentially leading to prosecutions. Instead, Comey and his staff, trying to save their own "political skins," played the game with the congressional intel committees and buried it. The likely motive: the NSA and CIA have dug up dirt on all of them, dirt that could not only end or severely harm their political careers, or if it constituted crimes land them ultimately in prison.

Thus, it comes as no surprise that Chairman and Senator Richard Burr of the Senate Intelligence Committee yesterday criticized President Trump's firing of Comey. Burr in my opinion is a lackey of the Republican establishment and only God knows what these intelligence agencies have on him, or his cohort Senator John McCain, another prominent establishment Republican who backed Comey and predictably criticized President Trump, who he obviously despises, for the firing.

In the last several weeks, given my increased public pressure on Comey and the congressional and intel establishment to conduct bona fides investigations, my cell phone and computer has been again violated, I believe by the powers-to-be in the NSA and CIA. So too have the devices of my client Dennis Montgomery. The rank illegality of the intelligence agencies, who are not in practice accountable to even President Trump, is beyond even the imagination of writers Orwell or Marconi. I will however be filing a new case against the intelligence agencies and Comey, and have it assigned as related to my prior cases against them, to Judge Leon.

While I am pleased that Comey is now gone, having been disgraced as the political hack he sadly became, there is much work to be done, and the American people cannot be afraid to soldier on. I for one will not quit, and now that Comey is history, it's time for other government heads to roll in what is in my opinion the biggest and most dangerous scandal in American history.

For more information about my efforts, and what I hope will give rise to your support, go to www.freedomwatchusa.org.