Copy
Contribute to our cause and support Freedom Watch www.freedomwatchusa.org/donate or call 844 FW ETHIC to donate over the phone. We are your justice department fighting for your liberty against tyrannical government overreach.
We Need Your Support for Our Leftist Media Strike Force 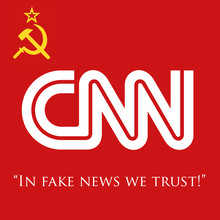 By Larry Klayman, Chairman and General Counsel
April 12, 2017
It seems that the "Fake News" spewing daily from CNN, which I have come to regrettably label the "Communist News Network," will never end! Now, the latest ruse, according to CNN, is that both Democrats and Republicans on the House Intelligence Committee agree there is no basis to claim that former Obama national security adviser Susan Rice did anything improper in unmasking the names of American citizens, namely President Trump's advisers such as General Mike Flynn. This of course was allegedly gleaned from classified National Security Agency (NSA) intelligence reports.

And, what is the basis for this newfound revelation: the NSA itself — the agency that perfected the "Art of the Lie." Indeed, in two landmark decisions by the Honorable Richard J. Leon of the U.S. District Court for the District of Columbia in cases styled Klayman et, al v. Obama et. al (see www.freedomwatchusa.org), the jurist found that the NSA had engaged in unconstitutional mass surveillance, much like the illegal surveillance that Susan Rice was caught doing against Trump and his team. These landmark rulings came after the former Obama Director of National Intelligence, James Clapper, lied falsely under oath to Congress that this mass surveillance, without probable cause as required by the Fourth Amendment to the Constitution, was not routinely occurring.

CNN, which has morphed from its self-described motto of "The Most Trusted Name in News," to "The Least Trusted Name in News" is literally on a journalistic remake of the 1917 Russian revolution. Ultra-leftist newscasters such as Don Lemon, Jake Tapper, Wolf Blitzer, Anderson Cooper, and last but hardly least its only "out of the closet" communist Van Jones — a man so Trotsky-like that even our previous socialist President Barack Hussein Obama had to ask him to resign from his administration — have become the equivalent of Marxist Soviet propagandists ala the state news organ Pravda. The Fake News which drips from the lips of these leftist political schills would make any Bolshevik proud for its near total dishonesty and rank yellow journalism.

Don Lemon, in particular, wins the individual "Medal of Kremlin Award," for his blatant unapologetic nightly rampage unabashedly spewing raw leftist sewage on the American people. To prove my point, watch this interview which I walked into and was forced to endure after I won my victories against the NSA before Judge Leon. Rather than wanting to discuss the significance of these historic rulings, Lemon and his comrade, leftist-in-arms, Jeffrey Toobin, CNN's so-called legal analyst, sought instead to smear me — someone who they obviously view as a threat to their creed. In so doing, they even cut my feed during the interview when I challenged them for their rank leftist bias in support of President Obama and former President Clinton.


While the other leftist cable networks, MSNBC and CNBC, hold their own when it comes to Fake News designed to delegitimize and bring down the Trump presidency, I feel duty bound to bestow the overall network championship "2017 Karl Marx Award" on CNN.

So when this leftist and anti-conservative rag of a network goes off on its latest pogrom later today, just remember that, like the former Soviet Union, its days are numbered. Even the leftist American viewers of CNN like the Russian people before them are not stupid, and just as the former Soviet Union finally fell of its own weight, so too will CNN. There is just so much Fake News that any reasonably intelligent comrade can digest before throwing up his or her red cabbage borscht!

Contribute to our cause and support Freedom Watch

We are your Justice Department fighting for your liberty against tyrannical government overreach!