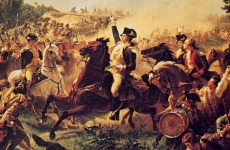 (Washington D.C., November 11, 2013). As the Declaration of Independence requires of all Americans, it has now become necessary for one people to dissolve the political bands that have connected them with another. It is critical for us to rise up and confront the political establishment that has willfully and maliciously bound our hands and voices. We must invoke our unalienable right to liberty. Our government has become so destructive that, as our Founding Fathers expressed, it is our right and duty to alter or abolish it, while "instituting" a new government that truly represents We the People.

With the growing scandals of the Obama administration such as its utter indifference to the brutal murders in Benghazi, the willful targeting of conservative groups and others by the Internal Revenue Service, the unconstitutional, massive spying program instituted by Obama's National Security Agency, and its blatant lies to the America people regarding ObamaCare in its egregious and dangerous attempt to socialize the United States of America, Reclaim America Now Coalition seeks to, in effect, "call out" the administration for its unprecedented failure to represent We the People, to shine light upon what Barack Obama calls "phony scandals," and to allow people with legitimate grievances to finally be heard.

Larry Klayman, founder of Judicial Watch and Freedom Watch, former U.S. Justice Department prosecutor and an organizer of Reclaim America Now, said this: "The Second American Revolution begins November, 19, 2013. Our country is headed into a potentially fatal downward spiral, under the tyrannical control of a hostile government that no longer represents We the People. I call upon all patriots – Democrats, Republicans and others – to peacefully descend on Washington D.C. on the 19th en masse, and reclaim our freedoms promised to us in our Constitution, the same Constitution that the Obama administration so frequently violates. We the People do not know where this road will lead us precisely, but we know that it is necessary to begin the process of having Americans stand up for their rights and not look to our compromised and corrupted executive, legislative and judicial branches of government to do what is our God-given duty; to restore freedom to the United States of America."