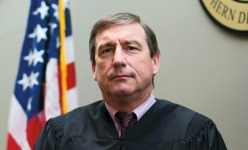 Brownsville, Texas (March 9, 2015) – Federal judge Andrew Hanen has opened an inquiry into whether President Barack Obama violated a temporary injunction that halted Obama's amnesty programs on February 16, 2015. Judge Hanen has set a hearing for March 19, 2015, at 1:30 PM CST. Perhaps of greatest significance, Judge Hanen has also frozen all other motions pending before him in the case. As a result, the Government's request to move forward with amnesty for approximately 5 million illegal aliens has been stopped. The U.S. District Court for the Southern District of Texas will not consider the U.S. Government's motion to "stay" the temporary injunction. The effect of that triple negative of motions is that Obama's amnesty programs will remain halted indefinitely.

On February 27, Larry Klayman filed a request on behalf of Sheriff Joe Arpaio that Judge Andrew Hanen convene a hearing asking the U.S. Government to show cause why it should not be held in contempt of the injunction. The motion cited news reports that the Executive Branch was continuing to move forward with Obama's "deferred action" amnesty for illegal aliens by executive action full throttle. However, Arpaio is in only a "Friend of the Court" role in that case in Texas and the U.S. Government opposed the request.

Yet, then, prompted by Klayman and Arpaio's "Friend of the Court" request, the U.S. Government responded with an "Advisory" disclosing that the U.S. Department of Homeland Security had already issued 100,000 renewals of amnesty "dreamers" under Obama's new November 20, 2014, expanded rules. Illegal aliens who arrived as children (but may now be up to 31 years old) received "Deferred Action for Childhood Arrivals" (DACA) status under Secretary of Homeland Security Janet Napolitano's June 15, 2012, program. In November, Obama expanded those rules through Memoranda issued by current Secretary of Homeland Security Jeh Johnson.

On March 5, the Plaintiffs, a coalition of 26 States challenging executive action amnesty, responded by filing a Motion for permission to conduct early discovery, along the same lines as Arpaio and Klayman's earlier February 27 motion. On March 9, 2015, Judge Hanen granted the Plaintiff States' motion to take discovery into whether the Obama administration had violated the injunction and/or mispresented its actions earlier in a court hearing.

Judge Hanen's temporary injunction has been appealed to the U.S. Court of Appeals for the Fifth Circuit, but the Obama administration asked to have the injunction lifted (stayed) during the appeal.