Copy
The Beginning of the Non-Violent, Peaceful, Second American Revolution 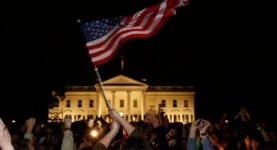 (Washington, D.C., November 6, 2013). Today, Larry Klayman, the founder of Freedom Watch and an organizer of "Reclaim America Now Coalition" announced that the National Park Service has granted the coalition a permit to meet and protest the Obama administration's continuing failure to take into account and redress the grievances of the American people. The demonstration will also address President Obama's cover-up of various scandals, including the growing NSA scandal. It will include not only persons who have been summoned to Washington, D.C., to mass and show the resolve of the people, but also will include prominent speakers such as Former U.S. Attorney and Congressman Bob Barr, Former U.N. Ambassador Alan Keyes and others from all walks of life who have been aggrieved by the policies and actions of President Obama and other government leaders. See www.reclaimamericanow.net.

Never before has such a widespread coalition been compiled to show peaceful, non-violent force, as in the days leading up to the American Revolution. As our Founding Father and second president declared, "[w]hen the government fears the people, there is liberty." In the style of Gandhi, Martin Luther King Jr., and others who have changed history and reclaimed freedom, Americans have no choice – as the three branches of government have completely abdicated their representation of citizens' complaints. The government needs to fear that the people will rise up if things do not change in Washington, D.C.

A list of demands of legitimate grievances will be presented to President Obama and other government leaders, which they can remedy or resign from office.

Klayman, one of the organizers of this effort, said: "We the People have had enough of the corrupt and incompetent ways of the Obama administration and its bipartisan political enablers. It is time for action, not words. Together, the American people will prevail and will save this nation from extinction at the hands of a present government that could care less about the legitimate needs of the people. We welcome persons from all spectra of society to join us in this quest to reclaim freedom for the masses."

See www.reclaimamericanow.net and contact us at daj142182@gmail.com to join the fight before all is lost.