Occupy Washington on November 19 and demand that Obama resign 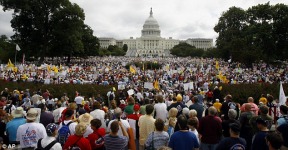 (Washington, D.C., September 21, 2013). On September 18, 2013, President Barack Hussein Obama was convicted of defrauding the American people with regard to his eligibility to be president by his having submitted a forged birth certificate to state and federal officials. This resulted in his being elected to the Office of the Presidency in 2008 and 2012. Simply put, Obama is not a natural born citizen born in the United States to two American parents and therefore he is ineligible to be president under the U.S. Constitution. He lied about his birth certificate and was sentenced by a citizens' court to ten years in prison for his false statements.

In light of this conviction, and the many atrocities Obama has committed against the United States of America, as evidenced by what he terms as "phony scandals" ranging from Benghazi-gate, to NSA-gate, to IRS-gate, to Fast and Furious-gate, to Obamacare-gate, to Navy Seal-gate, and his allegiance to radical Islam over American interests, he must now be forced to leave office so that freedom can be restored to the nation.

As a result, we are calling upon all patriots to Occupy Washington on November 19th and to peacefully shut the city down until Obama agrees to leave office. Construction workers, bikers, truckers, doctors, lawyers, students, clergy, and all persons who see our nation slipping away from us under this president are summoned to appear and give testimony to their grievances.

Larry Klayman, the founder of Freedom Watch, a former prosecutor for the Justice Department, and the organizer, had this to say:

"Under Obama, the nation has been raped by a president who is not only a Muslim at heart and who favors Islam over our Judeo-Christian heritage (illustrated by his cancellation of national prayer day in the White House, his encouragement for the construction of a mosque at Ground Zero, the ring on his finger that reads in Arabic 'There is no god but Allah,' and his conspicuous mission to win the hearts and minds of the enemy our brave soldiers are fighting against), but is also a racist, socialist, pro-illegal immigrant, pro-radical gay and lesbian, and who has trashed our national prestige to the point that communist Russia is now the leading world power. It is time that We the People borrow a page from such historic figures as Martin Luther King, Mahatma Gandhi, and Nelson Mandela and use protest and civil disobedience to rid ourselves of the poison that occupies the White House. The court system no longer works and is polluted by individuals who favor political correctness over justice, and our Congress is run by impotent 'yes men' of both political parties who put their own interests ahead of the people's. It is thus time for all of us to rise up and reclaim the republic before all is lost. It is not optional that you come to Washington, D.C., on November 19. It is your duty if you believe in the vision of our Founding Fathers, who pledged their fortunes, sacred honor, and risked their lives to form the greatest nation the world has ever known."

I look forward to seeing you on November 19 in our nation's capital. It's time to finally do what must be done to save the United States of America!"