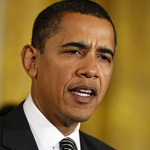 U.S. President A Danger to Middle East Stability and Peace
(Washington, D.C., March 15, 2011). Today, in the wake of the Saudi invasion of Bahrain, sanctioned by the Gulf Cooperation Council, Larry Klayman, founder of Judicial Watch and Freedom Watch and an international lawyer, issued the following statement:

"Yesterday, because of the failure of President Obama to confront Iran's hegemony and expansion of its radical Islamic sphere of power in the Middle East, King Abdullah of Saudi Arabia, in conjunction with his Arab Gulf Cooperation Council partners, invaded Bahrain to head off an overthrow of its government by extremist Shiites loyal to the radical mullahs in Tehran. This act by King Abdullah, whose kingdom has been at loggerheads with Obama and his Secretary of State Hillary Clinton over their betrayal of President Hosni Mubarak in Egypt, and their weakness in confronting and to the contrary appeasing Iran, underscores how even Arab rulers have lost any faith in the American president, and do not respect him.

Ironically, Obama and Clinton have also seriously alienated Israel, another strong ally of the United States, and their actions will likely cause Israel and Saudi Arabia to take matters into their own hands to eliminate the Iranian threat. The Saudis invasion of Bahrain is the first sign that they consider Obama and Clinton to be in effect enemies of their countries' interests.

Freedom Watch applauds the actions of the Saudis. It's time to not only stop the hegemony of the mullahs in Tehran, but also to take strong action to remove them from power. The world cannot leave in power a radical neo-Nazi Islamic regime, bent on not only destroying Israel, but pursuing a radical Shiite Islamic revolution worldwide. Sadly, and dangerously, thanks to Obama and Clinton, the Iranian regime has been succeeding, so much so that the Saudis now saw an urgency to step in to do the job the United States should have done long ago by stopping Iran in its tracks."