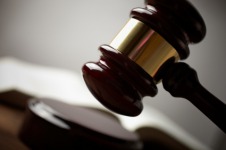 (Ocala, Florida, September 19, 2013). Yesterday, the Citizen's Court convicted President Barack Hussein Obama of lying to the American people about his birth certificate, which was alleged to be a forgery, after considerable investigation. This birth certificate, which was belatedly posted on the White House website after he was challenged about his eligibility to be president, since it was alleged that he is not a "natural born citizen" born in the United States to two American citizen parents, is not genuine but allegedly altered.

Prior to yesterday's citizens' judge tried conviction (see www.citizensgrandjury.com to view the verdict), Obama was indicted by a citizens' grand jury in Ocala, Florida. He was served with the indictment at the White House but refused to respond and plead his innocence, leading to a non-jury trial in Ocala for his false statements over his birth certificate to the American people and the people of Florida. These alleged false statements fraudulently allowed him to be placed on the Florida presidential ballot in 2008 and 2012, ultimately leading to his election and reelection.

While there are pending civil cases challenging Obama's eligibility in Florida and elsewhere around the nation, judges have thus far refused to act and have sought to sidestep this "hot potato" of an issue. As a result, a citizens' grand jury and court had to act. Indeed, this option is part of the American system of justice, as recognized in Supreme Court rulings. See www.citizensgrandjury.com. This safeguard was put into the Constitution by our Founding Fathers to use when the government-run court system becomes so corrupt and a tool of the establishment that it fails to address the grievances of the people. It is a safety valve to violent revolution, as occurred in 1776.

Larry Klayman, founder of Judicial Watch and now Freedom Watch, who served as the citizens' prosecutor, had this to say upon obtaining Obama's conviction:

"In this country no one is above the law, not even a president. If Obama had been innocent, he would have had the courage to come forward and defend the citizens' charges against him. His arrogance and deceit have been redressed, and he should, as the citizens' court ordered, surrender himself into the custody of the American people and the people of Florida. The time has come for the people of our great nation to legally take matters into their own hands and hold politicians truly accountable."

For more information and to view the indictment and verdict, see www.citizensgrandjury.com or contact (424) 274-2579.