Copy
FBI Director Serves His Own Interests and Not the Nation 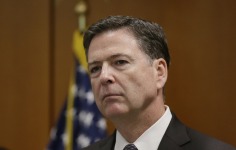 (Washington, D.C., November 6, 2016). Larry Klayman, a former federal prosecutor of the U.S. Department of Justice and the founder of Judicial Watch and Freedom Watch, reacted to and explained the predictable statement by FBI Director James Comey again "clearing" Hillary Clinton of wrongdoing with the use of her private email server. Upon hearing the news he predicted when Comey first announced he so-called reopened Hillary Clinton's private server email investigation, Klayman stated:

"Having had experience with Director Comey the way the Obama administration conducts email searches in FOIA cases as just one example, I predicted that the director would flip flop to precipitously again 'clear' Hillary Clinton just before the election. The way this was done, if there is any credibility to the investigative process at all – which is doubtful – was to come up with search terms to quickly scan the 650,000 plus discovered emails on the computer of Anthony Weiner, so that no incriminating documents would be identified. This is exactly what Freedom Watch and I have experienced with the Clinton State Department, where phony search terms are used to search for documents with regard to our Freedom of Information Act requests, the result being that only few documents are ever produced.

"This cover-up underscores the complete breakdown of our justice system run by political hacks, which represents the elite like Hillary Clinton and not the American people. As I wrote in my weekly column (http://www.wnd.com/author/lklayman/), this is why the American people are back to 1776, and a new Second American Revolution is regrettably about to be sparked."