Klayman: What We Learned Was That If One Is a "One & Done" Duke Non-Student Ringer There Will Be No Consequence With Coach K and the Whorish Duke Administration!
Order "It Takes a Revolution: Forget the Scandal Industry!" at BarnesandNoble.com 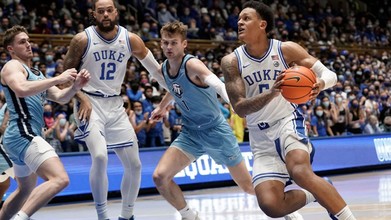 Banchero: We all learned from incident, moved on
ESPN.com
November 23, 2021
Duke's Paolo Banchero, speaking for the first time since he was charged with aiding and abetting impaired driving during a Nov. 14 incident that involved teammate Michael Savarino, said Monday night that the Blue Devils "all learned from it" and have "moved on."

"My teammates had my back, so it wasn't too hard for me,'' Banchero said after scoring a career-high 28 points in Monday's 107-81 win over The Citadel. "I'm not going to say it wasn't on my mind the past two games. It was. I feel like today was a bounce-back game for me and I felt good out there.''

Banchero, a top NBA prospect, was in the starting lineup against Gardner-Webb on Nov. 16 for Duke's first game following the incident. He finished with 10 points in that game and 11 points in Friday's win over Lafayette, his lowest-scoring games of the season. Editor's Picks