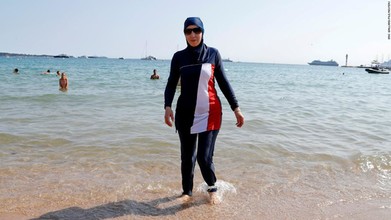 French court confirms ban on 'burkinis' in city's swimming pools
By Joseph Ataman and Tara Subramaniam
CNN
June 23, 2022
Paris (CNN)A day at the pool will be out of reach for some women this summer in the eastern French city of Grenoble, after a higher court upheld a ban on full-length swimsuits known as "burkinis' in public swimming pools.

Following a series of protests by local Muslim women, the city had passed an edict in May 2021 allowing bathers at public pools in Grenoble to use the swimwear.

But later that month, the city's administrative tribunal overruled the decision -- a ruling upheld on Tuesday by France's highest administrative court.