Klayman: Trump Is Right: McConnell and Republican Party Are Dead and Worthless!
Order "It Takes a Revolution: Forget the Scandal Industry!" at BarnesandNoble.com 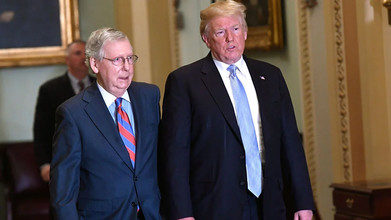 Trump blasted his former Senate ally as "stupid" and a "fool" and accused him of "incompetence" in a long, tangled statement that jumped from expressing displeasure over Republican votes on a procedural motion related to raising the debt limit in October, to Congress's passage of the $1.2 trillion bipartisan infrastructure bill this month, to the ongoing Democratic talks over a social spending bill.

Trump's scathing statement follows several similar attacks in recent days in which he lashed out at "Old Crow" McConnell for voting for the hard infrastructure bill along with 18 other Senate Republicans and 13 House Republicans.