Klayman: Trump Can and Should Buy a New Plane With His Own Allegedly 8 Billion Dollars and His Dishonest Consultants Like Kimberly Guilfoyle Should Quit Shaking Down Supporters!
Order "It Takes a Counter-Revolution!" at Amazon.com
Donate and Support Freedom Watch at www.FreedomWatchUSA.org 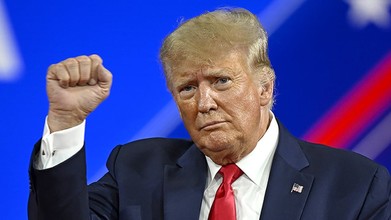 Trump: I am not using campaign funds for new plane
By Bob Cusack
TheHill
March 16, 2022
Former President Trump on Monday said he is not using any campaign funding to construct a new plane.

In a phone interview, Trump took issue with an article by The Hill over the weekend that cited a fundraising email his political action committee recently sent out.

"The story was incorrect," Trump told The Hill. "I already have a plane, the same one I used on the 2016 campaign."