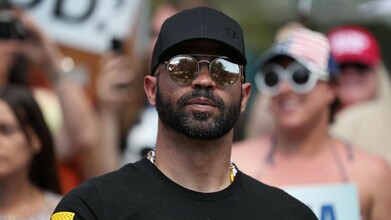 Former Proud Boy testifies in Jan. 6 seditious conspiracy trial
ABC News
January 25, 2023
Matthew Greene took the stand on Tuesday in the trial of the former leader of the Proud Boys and four associates who are each accused of seditious conspiracy against the United States, among other charges, as part of an alleged plot to disrupt the certification of President Joe Biden's 2020 election victory.

Enrique Tarrio, the ex-leader, and Ethan Nordean, Joseph Biggs, Zachary Rehl and Dominic Pezzola have all pleaded not guilty.

In his testimony, Greene said that in the weeks before Jan. 6, 2021, the group had been trying to stir up violent interactions with those they believed to be part of an "antifa," or anti-fascist, group.