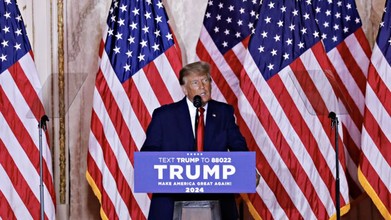 Trump and his attorneys on the hook for nearly $1 million in sanctions for Clinton lawsuit, judge says | CNN Politics
By Tierney Sneed
CNN
January 20, 2023
A federal judge said Thursday that former President Donald Trump and his attorneys are liable for nearly $1 million in sanctions for a lawsuit Trump brought against Hillary Clinton, ex-top Justice Department officials and several others alleging they conspired against him in the 2016 campaign.

"This case should never have been brought. Its inadequacy as a legal claim was evident from the start," US District Judge Donald Middlebrooks of the Southern District of Florida wrote. "No reasonable lawyer would have filed it. Intended for a political purpose, none of the counts of the amended complaint stated a cognizable legal claim."

Middlebrooks had previously granted the request for sanctions filed by one of the defendants in Trump's lawsuit. That order — which demanded sanctions of more than $66,000 — has been paused while Trump's attorneys appealed. The latest decision, which ordered $937,989 in sanctions, stems from a request by several other defendants, including Clinton.