Klayman: The Two Faced RINO Barr Appears to Also Be Breaking Out of His Suit!
Order "It Takes a Counter-Revolution!" at Amazon.com
Donate and Support Freedom Watch at www.FreedomWatchUSA.org 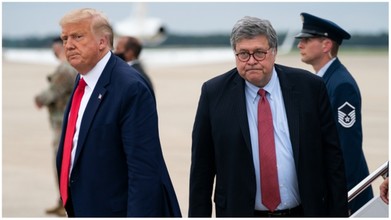 Why Barr is breaking from Trump -- and the GOP -- over Mar-a-Lago search
The Hill
September 11, 2022
Former Attorney General William Barr has emerged as one of the most prominent conservatives to suggest former President Trump may be in serious legal jeopardy over his handling of sensitive materials, underscoring the growing divide between the former president and his onetime staunch ally.

Barr has become a regular presence on Fox News over the past few weeks, weighing in on the FBI search of Trump's Mar-a-Lago estate in Florida and subsequent court battles over what the Department of Justice (DOJ) can do with what it found.

It's not the first time Barr, a frequent target of criticism from Democrats as attorney general, has broken with Trump. Nor is he the first former Trump Cabinet member to become critical of the former president.