Klayman: The Truth Is That Omar and Tlaib Have More "Rights" Than Jews Christians and Whites: They Both Committed Crimes and Got Away With Them Even Under the Trump Justice Dept.
Order "It Takes a Revolution: Forget the Scandal Industry!" at BarnesandNoble.com 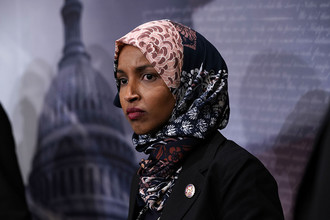 Dem leaders look to deescalate Omar drama
By Sarah Ferris
POLITICO
June 11, 2021
Top Democrats on Thursday attempted to quickly defuse a fraught dispute within their caucus after comments by Rep. Ilhan Omar that compared war crimes committed by the U.S. and Israel to Hamas and the Taliban incensed some Jewish Democrats.

Speaker Nancy Pelosi's leadership team took the unusual step of issuing a statement that both rebuked Omar for her comments and thanked her for later clarifying her remarks — taking a more nuanced approach than the last major uproar over the Minnesota Democrat's comments on Israel that escalated into a days-long political crisis for her party.

The rare unified statement from the top six Democratic leaders came less than 24 hours after a dozen of Omar's Democratic colleagues issued a late-night statement criticizing her. While Democratic leaders did not follow House GOP counterparts in accusing Omar of antisemitism, the Pelosi-led statement warned that "drawing false equivalencies" such as Omar's "foments prejudice and undermines progress toward a future of peace and security for all."