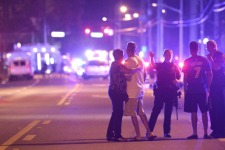 Underscores Why Muslim Immigration to the United States Must End

(Washington, D.C., June 12, 2016). In the wake of the horrific Orlando Islamic terrorist attack, Larry Klayman, a former federal prosecutor, founder of Judicial Watch and Freedom Watch, and a 2003-2004 candidate for the U.S. Senate in Florida, where the act of terrorism occurred, had this to say:

"The president's speech today is a national and international disgrace. Being born to a Muslim father and schooled in Medrassa schools in Indonesia, and having as his friends and supporters domestic Muslim terrorist sympathizers like Rev. Louis Farrakhan of the Nation of Islam, President Barack Hussein Obama refuses to fight much less address Islamic terrorism in any meaningful way. It is no wonder that his speech today refused to even use the word 'radical Islamic terrorism' much less 'Islamic terrorism,' despite the shooter being of Afghani origin, and despite what the FBI revealed were his ties to ISIS. Indeed, it has been reported that at the time of the deadly attack, he repeatedly screamed 'Allah Akbar.' Prior to the deadly attack, he called 911 and pledged allegiance to ISIS. And just in the last hour ISIS claimed credit for the horrific attack.

"This horrific Muslim terrorist attack, aimed at Americans and the gay community in Florida and it appears now also West Hollywood, California – where an individual was apprehended as well this morning apparently on his way with explosives and other weapons to the Los Angeles Gay Pride Parade – underscores how Islam hates not just Americans but especially gay Americans. Islam is hostile to homosexuals, and Sharia law and the Quran advocates killing them.

"This is just another example of why we need a total ban on Muslim immigration. There simply are no constitutional rights to persons who are not citizens or permanent residents. While the Muslim terrorist in Orlando was an American citizen, we need to limit the nation from taking any more Muslim immigrants who someday could also become citizens or permanent residents. It's also time to deport all Muslims who are in the United States illegally and on student and other types of temporary visas. We are at war and need to now act accordingly, no matter what President Obama continues to attempt to cover up given his Muslim heritage and connections.

"Our prayers are not only with gay victims, but also all Americans who are, thanks to President Obama, unnecessarily exposed to the continuing Islamic terror threat."