Klayman: Same Dishonest Tactics of the Jewish Left Being Used Against the Right in Israel!
Order "It Takes a Revolution: Forget the Scandal Industry!" at BarnesandNoble.com 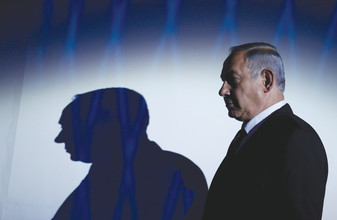 Netanyahu amid incitement concerns: Don't be afraid to stick it to them
By Tamar Beeri, Gil Hoffman
The Jerusalem Post | JPost.com
June 6, 2021
Prime Minister Benjamin Netanyahu criticized Shin Bet (Israel Security Agency) Director Nadav Argaman on Sunday for issuing a public warning that the current atmosphere of incitement could lead to bloodshed.

Argaman on Saturday condemned language that might be perceived as "one who endorses violent and illegal activities that could even lead to harming individuals."

Without mentioning Argaman, whom he appointed, by name, Netanyahu complained of a double standard in which critical statements by figures on the Right are considered incitement, while those of the Left are seen as legitimate.