Klayman: Sad to See Golf Digest, Which Claims to Represent the Esteemed Game of Golf, Spew This Bullshit!
Order "It Takes a Revolution: Forget the Scandal Industry!" at Amazon.com 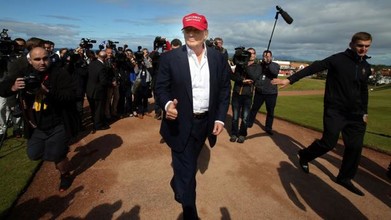 It's no longer about politics: Golf needs to distance itself from Trump
GolfDigest.com
January 9, 2021
The PGA of America should remove the 2022 PGA Championship from Trump National Golf Club in Bedminster, N.J.

It needs to announce the decision today and make it very clear: We want nothing to do with soon-to-be-former President Donald J. Trump.

This is no longer a political issue; it is no longer a case of taking a side with one political party or another. This is about a man who encouraged—all but ordered—his supporters to attempt some sort of clumsy coup d'etat on the United States government. This is about a man who, even AFTER finally telling his supporters it was time to leave the U.S. Capitol following one woman's death and the Capitol building itself—a major part of our country's history—had been severely damaged, tweeted: "We love you. You're very special."