Klayman: Rosenstein Must Be Fired and Indicted for Complicity in Mueller Crimes!
Go to www.FreedomWatchUSA.org to Sign Petition to Appoint Klayman as Special Counsel. Also Donate and Share! 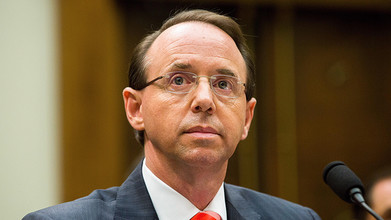 If Rod Rosenstein feels conflicted, he should simply recuse himself
By Jonathan Turley, opinion contributor
TheHill
July 2, 2018
In testimony and reports this week, Deputy Attorney General Rod Rosenstein has emerged as the Hamlet of the Potomac, an increasingly tortured and conflicted figure who is both misunderstood and misunderstanding. According to the New York Times, Rosenstein swayed between angst and anger in the aftermath of the firing of FBI Director James Comey. In conversations with both friends and colleagues, he reportedly "expressed anger" and "remorse" while appearing "conflicted," "shaken," "unsteady" and "overwhelmed."

The reports only magnified prior concerns of the ethical basis for the deputy attorney general to appoint and supervise special counsel Robert Mueller. Rosenstein has long maintained that he can handle such concerns. The suggestion is that, as with Hamlet, "there is method" to any "madness" that he might have displayed.