Copy
Says it is Proof Positive that President Has Told Attorney General to Deep Six Any Indictment of Clinton Over Email Scandal and Shows Just How Corrupt Obama and his Obama Justice Department Are! 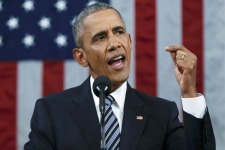 "Hillary Clinton, who has a sordid past of illegalities, crimes and cover-up, and is embroiled in an on-going criminal investigation over her illegal use of a private email server while Secretary of State, has now been endorsed by her fellow criminal, President Barack Obama, who has perpetrated numerous scandals during his presidential administration, ranging from Benghazi-gate, to IRS-gate, to Fast and Furious-gate to Illegal Immigration-gate, and a myriad of others.

This endorsement is proof positive, as boasted to by Hillary Clinton herself just yesterday, that she will never be indicted by President Obama's Attorney General Loretta Lynch, over the FBI's on-going investigation of her illegal use of a private email server while Secretary of State under Obama. This private email server was used not just to circumvent national security laws, but so Clinton could sell access to the State Department to enrich herself, her husband Bill Clinton, and the Clinton Foundation. In effect the private server was used to solicit bribes from foreign interests in Iran, Saudi Arabia and other terrorist and terrorist supporting Middle Eastern countries.

Our nation is being destroyed by corrupt politicians in both political parties and our justice system is corrupt to the core. By endorsing Clinton, President Obama has brazenly admitted that the fix is in, and that he and the Clintons continue to be above the law. They have little regard for the Director of the FBI, James Comey and his fine special agents, who in good faith have been conducting a bona fide criminal investigation which has yet to be completed. Not since the days of Richard Nixon has a president so defied the FBI and those honest working level servants in my alma mater, the U.S. Department of Justice, of which Attorney General Loretta Lynch, like her predecessor, is not one."