Klayman: RINO Republican Hacks but Fox News Generally Is No Better!
Order "It Takes a Revolution: Forget the Scandal Industry!" at BarnesandNoble.com 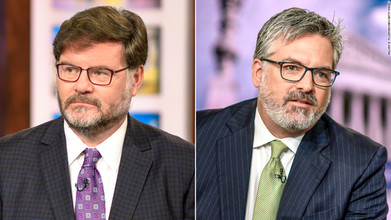 Jonah Goldberg and Stephen Hayes resign from Fox News, protesting 'irresponsible' voices like Tucker Carlson
By Brian Stelter, CNN Business
CNN
November 22, 2021
Every month or so, while conversing with sources at Fox News, I express surprise that Jonah Goldberg and Stephen Hayes are still employed by the network. After all, the two men are reality-based conservative thinkers who refuse to capitulate to Donald Trump. Unfortunately, Fox viewers rarely get to hear from them. They are booked by the network's producers so rarely that their contracts could be likened to golden handcuffs.

Now they are ditching the cuffs.

Hayes and Goldberg announced Sunday night that they have resigned from Fox. The pair wrote in a blog post for The Dispatch, their online home, that Tucker Carlson's "Patriot Purge" propaganda film was the last straw.