Klayman: Of Course Not: Biden and McConnell Are Crooked Birds of a Feather: Both Bribed by Beijing!
Order "It Takes a Revolution: Forget the Scandal Industry!" at BarnesandNoble.com 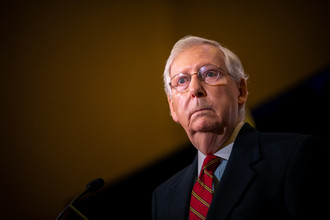 'I can't afford a big frontal attack on the president,' Mitch McConnell confided
By William M. Arkin
Newsweek
November 23, 2021
In this daily series, Newsweek explores the steps that led to the January 6 Capitol Riot.

On Monday, November 23, Attorney General William Barr met with President Trump in the Oval Office, the first time the two had met or even spoken since mid-October. He had been one of Trump's most loyal cabinet members and an unquestioned conservative.

A White House aide had called Barr to tell him that the president was displeased that he hadn't heard from him. According to Woodward and Costa's "Peril," Barr went to the White House where Trump complained about election fraud, telling the Attorney General that he had heard that the Justice Department was "hanging back." Trump asked why Justice wasn't looking into the reports.