Klayman Notices Video Depositions of Joe Biden and His Campaign
Testimony Set for November 5, 2020 in Lawsuit Over Biden's Interference With Google/YouTube

Copy
(Washington, D.C., October 21, 2020). Today, Larry Klayman, founder of both Judicial Watch and Freedom Watch, and a Justice Department prosecutor in its Antitrust Division, noticed the video deposition of Joe Biden and his campaign manager Kate Bedingfield, who are alleged to have tortiously and illegally interfered with the YouTube channel of Freedom Watch, Inc. after Klayman threatened to bring the presidential candidate before a citizens' grand jury over his and his sons alleged illegal activities in the Ukraine and China.

As a result of this alleged interference, Google/YouTube, attempting to curry favor with Biden and his campaign, removed all of Klayman's and his public interest group's YouTube postings for the last many years. Only after Klayman threatened Google/YouTube through its attorney at Williams & Connolly, also the law firm of the Clintons, with suit, were the postings restored. However, damage to Mr. Klayman's personal and professional reputations had already occurred.

Klayman thus filed suit against Biden and his campaign over this alleged interference in Florida state court in Palm Beach County and the case remains pending. It is styled Klayman v, Biden et. al, Circuit Court of the 15th District of Palm Beach County (Case No. 50-2019-CA-013457XXXXMB-AF).

Previously, Klayman and Freedom Watch and their client Laura Loomer had also filed a class action antitrust lawsuit against Google/YouTube and other big tech companies, which is headed to the Supreme Court. He did so long before the belated civil complaint filed today by Klayman's alma mater, the Antitrust Division, where Klayman was on the trial team that broke up the AT&T monopoly during the Reagan administration. In its compromised filing of today, attorney general Bill Barr and DOJ did not ask for the break-up of the Google monopoly as had occurred with AT&T, but only restrained and politically compromised measures to increase competition among search engine providers. The suit frankly falls short of the relief needed and is too little too late, given all that is happening with regard to discrimination against conservatives, people of faith and President Trump. Freedom Watch will be intervening in this government lawsuit to advocate for a total break-up of Google.

Klayman had this to say upon noticing up Joe Biden's video deposition:

"It's time for someone to hold Biden accountable not just for his complicity in the crimes committed by Hunter Biden, but also to rein in the social media companies. We at Freedom Watch are doing just that! Clearly, AG Bill Barr's Justice Department lacks the courage to take strong action." 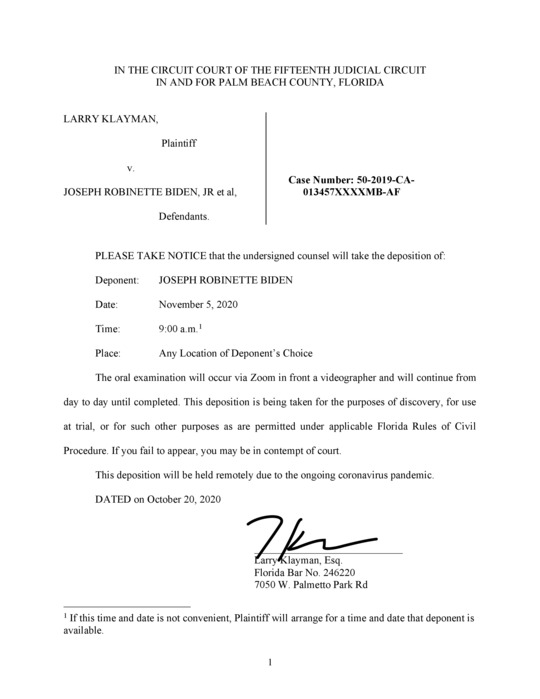