Klayman: More Proof That Police and the Military Are Seen as a Threat by and to Biden-Harris and the Left!
Order "It Takes a Revolution: Forget the Scandal Industry!" at BarnesandNoble.com 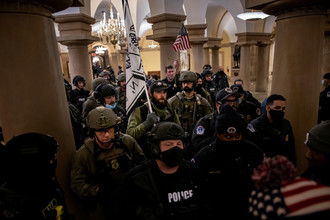 Capitol Police official who said to watch for 'anti-Trump' forces on Jan. 6 was deputy chief
By Kyle Cheney
POLITICO
May 1, 2021
The Capitol Police's highest-ranking commander on the ground during the Jan. 6 insurrection, Eric Waldow, is the official who urged officers to watch out for anti-Trump protesters in the massive pro-Trump crowd, according to congressional and Capitol Police sources.

That directive, delivered on the morning of Jan. 6 via a Capitol Police radio transmission, has alarmed lawmakers who were already worried that the leadership of the Capitol Police had failed to appreciate the gravity of the threat pro-Trump extremists posed to Congress that day.

Waldow, a deputy chief and the sixth-ranking official in the Capitol Police Department, was a Jan. 6 "incident commander," meaning he was responsible for directing officers' movements amid the chaos. He leads the Capitol Police's riot control force and is among a small group of senior officials who would have had access to the latest intelligence about the possibility Congress itself could be the target of an attack by extremist Trump backers.