Klayman: McConnell Should Be Removed With Biden and Thrown in the Same Cell! Both Traitors!
Order "It Takes a Revolution: Forget the Scandal Industry!" at BarnesandNoble.com 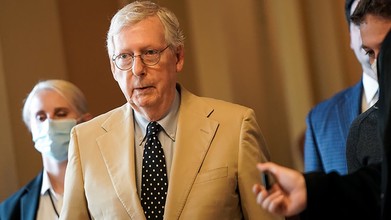 McConnell: Biden 'is not going to be removed from office'
By Jordain Carney
TheHill
September 2, 2021
Senate GOP Leader Mitch McConnell (Ky.) on Wednesday shot down calls from within his own party to try to impeach President Biden, pointing to next year's midterm election as a potential check on the administration.

"Well, look, the president is not going to be removed from office. There's a Democratic House, a narrowly Democratic Senate. That's not going to happen," McConnell said at an event in Kentucky, asked if Biden's handling of the drawdown in Afghanistan merits impeachment and if he would support it.

"There isn't going to be an impeachment," he added.