Klayman: LA Outrageous! If a Trans Black Attacks Fellow Black Dave Chapelle He Gets off Scot Free!
Order "It Takes a Counter-Revolution!" at Amazon.com
Donate and Support Freedom Watch at www.FreedomWatchUSA.org 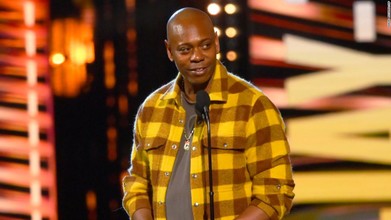 Dave Chappelle's alleged attacker will not face felony charges after DA declines case
By Cheri Mossburg and Taylor Romine
CNN
May 6, 2022
(CNN) The Los Angeles District Attorney's Office will not pursue felony charges against Isaiah Lee, the man accused of leaping on stage and attacking comedian Dave Chappelle during a performance a the Hollywood Bowl on Tuesday night.

Lee was, however, charged with four misdemeanors, including battery and possession of a weapon, Los Angeles City Attorney Mike Feuer announced in a press release and video message posted to Twitter on Thursday afternoon.

DA spokesperson Greg Risling said in a statement to CNN: "After reviewing the evidence, prosecutors determined that while criminal conduct occurred, the evidence as presented did not constitute felony conduct."