Klayman: If Their Allegiance Is to Sharia Over U.S. Law Then They Should Not Hold Office: That Is Correct!
Join and Support Our Coalition of the Jewish Right at www.FreedomWatchUSA.org 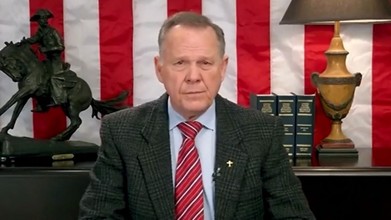 Roy Moore Says Muslims Can't Hold Public Office. As Usual, He's Wrong.
Americans United for Separation of Church and State
September 9, 2019
Nothing in the Constitution requires any public official to swear an oath on the Bible, nor is that document based on "the God of the Holy Scriptures." It is a charter for secular government.

Let's look at the relevant passage. Article 2, Section 1 of the Constitution deals only with the Oath of Office to be taken by the president. It reads, "Before he enter on the Execution of his Office, he shall take the following Oath or Affirmation: 'I do solemnly swear (or affirm) that I will faithfully execute the Office of President of the United States, and will to the best of my Ability, preserve, protect and defend the Constitution of the United States.'"