Klayman: If He Does Not Expire on His Own Biden Will Be a Vegetable by 2024! And Harris Could Not Win Dogcatcher! But U.S. Cannot Survive With These Two Dishonest, Stupid and Corrupt Leftists for the Next Two Years Until 2024!
Order "It Takes a Counter-Revolution!" at Amazon.com
Donate and Support Freedom Watch at www.FreedomWatchUSA.org 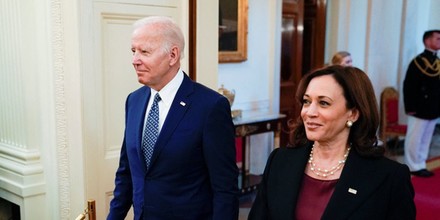 Democrats Expect Joe Biden to Run in 2024. They're Less Sure If He Should.
By Joshua Jamerson in Manchester, N.H., and Tarini Parti in Columbia, S.C.
WSJ
June 19, 2022
Democratic insiders in Washington and key primary states expect President Biden to follow through on his intention to stand for re-election and appear to have little appetite for casting him aside, though they expressed concerns about his advanced age and persistently low poll numbers.

The White House has repeatedly said that Mr. Biden, 79, the oldest president to be sworn into office, intends to run for re-election. A person familiar with the president's advisers' thinking said they are planning on him running and that the private conversations have matched the public statements. The current discussion is that an announcement would happen after the midterm elections, likely sometime in the spring of 2023, this person said.