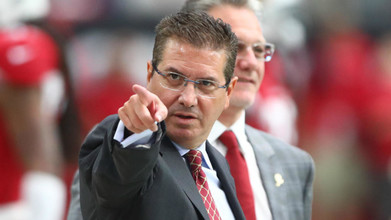 Washington Redskins name change: Team plans to scrap Native American imagery but keep color scheme, per report
By Jordan Dajani
CBSSports.com
July 9, 2020
It's pretty incredible what can happen in the span a week. We went from Dan Snyder and his Washington franchise conducting an internal review on its team name to companies pulling apparel off their shelves and powerful stakeholders raising their voices in hopes of change. It now appears more evident than ever that Washington will indeed change its team name, but what will that look like? Will Washington keep its burgundy and gold? On Wednesday, two key developments surfaced regarding Washington's name change.

According to ESPN's Adam Schefter, Washington is planning to have no Native American imagery, per a league source. This is probably one of the most obvious developments -- since the team name is considered an offensive slur. Either way, Washington will be moving away from anything even relating to Native Americans, whether it be weapons or headdresses/feathers.

Not long after Schefter's update, ESPN's John Keim reported that Washington plans to keep its colors of burgundy and gold "as of now."