Klayman: Gee Wiz! No Surprise the Communist News Network Has Its Panties in a Knot Over Jan. 6!
Order "It Takes a Revolution: Forget the Scandal Industry!" at BarnesandNoble.com 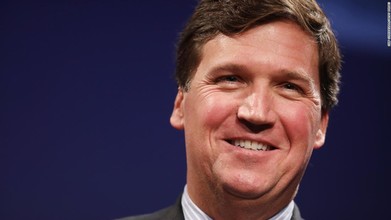 Fox News' Tucker Carlson problem
By Oliver Darcy, CNN Business
CNN
October 31, 2021
Fox News is not officially commenting on the record, but it seems the right-wing talk network is quietly trying to distance itself from Tucker Carlson's 1/6 trutherism.

That's the takeaway from this story by Daily Dot's David Covucci. He wrote on Friday that after his outlet published a story on Carlson's 1/6 special series, titled "Patriot Purge," the Fox News PR department reached out.

Fox PR intended its request to be off the record, but Covucci correctly noted that *both* parties must agree to go off the record before it is binding. "The Daily Dot did not agree to Fox's demand when it was sent this quote, and thus is not bound by the request," Covucci explained to readers. "Plus, you should know that even Fox News wants to distance itself from Carlson's documentary."