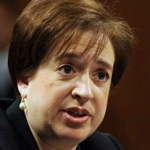 (January 6, 2012, Washington, D.C.). Freedom Watch and its founder, Larry Klayman, who also founded Judicial Watch, announced the filing of their amicus brief on behalf of the American people in the case of Florida v. Department of Health and Human Services, which will decide on the constitutionality of Obamacare ("the Act").

Freedom Watch's amicus brief demands the recusal or disqualification of Justice Elena Kagan from the proceedings, because of her former role as Solicitor General in helping to craft and enact Obamacare and the supportive and partisan statements she made about the legality of the Act before she joined the court. She has a clear conflict of interest and her impartiality may thus reasonably be questioned. This is the standard for recusal or disqualification for federal judges.

The issue of Justice Kagan's recusal or disqualification is even more important than the constitutional issues that are being decided. The Supreme Court is the only court in the United States which does not have an ethics mechanism to ensure the impartiality of its' decisions. Despite this, Chief Justice Roberts recently commented in the Supreme Court's annual report that its justices do not have to adhere to the rules of judicial ethics that apply to lower court judges. In effect, his comments maintain that justices are above the law and tantamount to judicial "royalty." Obviously speaking on behalf of all the justices, to add insult to injury he added that they will not sit in judgment of a fellow justice, no matter what ethical violation may present itself. See New York Times front page story of Jan. 1, 2012, titled "Chief Justice Defends Peers on Health Law."

In his brief, Klayman responds to the justices and writes in part: "... the comments of Chief Justice Roberts are an affront to the high ethical standards of our Founding Fathers and amount to a subversion of our laws. They are disgraceful at best and at worst amount to obstruction of justice. They are the result of someone who became Chief Justice by first ingratiating himself to the Washington establishment, and now seeks to act as the Chief Justice of this same establishment — which for decades has pushed the nation to the brink of revolution by representing mostly its own interests, perpetuating and consolidating its power and selling out "We the People."

Klayman further writes: This arrogance underscores "why the nation has lost trust in government, and why movements like the Tea Party and Occupy Wall Street have sprung up from all ends of the political spectrum. ... (T) he recusal or disqualification of Justice Kagan is even more important to preserving the ethical foundations of our Republic than the underlying issues of the constitutionality of the Act. Without a neutral, unbiased Supreme Court, there simply is no rule of law and any decision concerning the Act will be seen as Illegitimate."

The Court will be hearing Oral Arguments on the case in March of 2012.

For more information or an interview call 310 595 0800 or email leklayman@yahoo.com. The can brief be found at www.freedomwatchusa.org or www.cocklelaw.com. The docket number in the Supreme Court is 11-400 and a review of the file can be obtained through the court's Pacer system and its website.