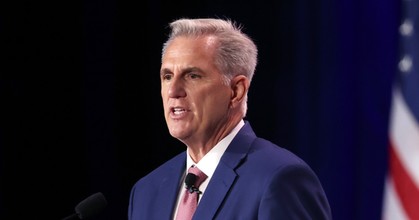 Kevin McCarthy could face a floor fight for speaker. That hasn't happened in a century.
NBC News
November 26, 2022
Republican leader Kevin McCarthy is struggling to secure the 218 votes he needs to be elected speaker of the House in January.

Because voters this month handed the GOP a wafer-thin majority, just a small bloc of conservative rebels could deny the California Republican the speaker's gavel at the start of the new Congress. Already, several McCarthy foes have declared they will not vote for him under any circumstance.

"He doesn't have the votes," said Rep. Andy Biggs, R-Ariz., a leader of the conservative Freedom Caucus. "Some of the stages of grief include denial, so there will be some denial and then there'll be the stage of bargaining where people are trying to figure out ... will there be some kind of consensus candidate that emerges."