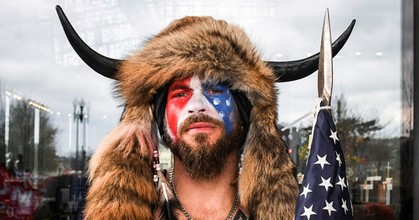 'QAnon Shaman,' Capitol rioter who wore horns, hires new lawyers
NBC News
November 23, 2021
The Arizona man known as the "QAnon Shaman" did not "personally authorize" the hiring of new lawyers who raised the possibility of appealing his conviction, according to a statement from his original lawyer.

The man, Jacob Chansley, who wore face paint and a horned, furry hat during the Jan. 6 Capitol riot, was sentenced last week to 41 months in prison, one of the longest sentences handed down so far.

John Pierce, a lawyer who represents several other Jan. 6 defendants, entered a notice of appearance in Chansley's case on Monday afternoon. That was followed by a statement from the National Constitutional Law Union, a conservative nonprofit founded by Pierce, declaring Pierce and another lawyer, William Shipley, would be representing Chansley going forward.