Klayman: At Least Reagan Was Not "Braindead" Like the Terminally Ill, Deluded and the Leftist, Socialist and Communist Tool Biden!
Order "It Takes a Revolution: Forget the Scandal Industry!" at Amazon.com 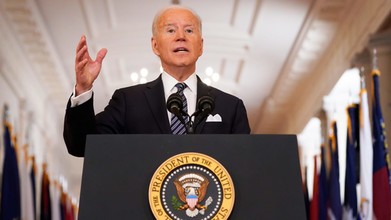 How Joe Biden--in Less Than Two Months--Turned Ronald Reagan's Decades-Old Conventional Wisdom on Its Head
By Dean Obeidallah
The Daily Beast
March 13, 2021
"The nine most terrifying words in the English language are: 'I'm from the government, and I'm here to help.'" With that famous line, uttered by Ronald Reagan on Aug. 12, 1986, during his second term as president, the GOP mantra for decades to come was born.

In fact, this philosophy later even found a home in the Democratic Party. President Bill Clinton in his 1996 State of the Union address declared that, "The era of big government is over," explaining that, "We have worked to give the American people a smaller, less bureaucratic government in Washington."