Klayman: And the Dems Are the Party of Radical Gays, Lesbians and Transgenders! Nice Duo Huh!
Order "It Takes a Revolution: Forget the Scandal Industry!" at Amazon.com 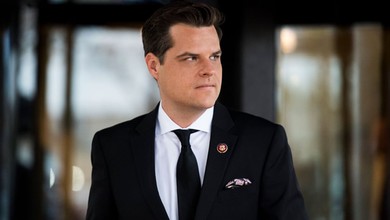 The Party of Pervy Projection Hits a New Low With Matt Gaetz
By Molly Jong-Fast
The Daily Beast
April 4, 2021
It's always the ones you most suspect.

Elements of Gaetz's story have been out there for a while, the "sleeping with staff for points" part was reported in January by Solomon Gustavo in Orlando Weekly and years before that by Marc Caputo but the Times was able to put the whole thing together. And when the whole thing came together, it sounded a lot like Qanon with men trafficking girls except that in the real-life version it always seems to be Republicans allegedly committing these crimes.