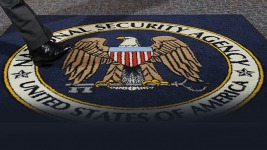 (Washington, D.C., January 24, 2014). Today, Larry Klayman, a former U.S. Justice Department prosecutor, announced that he and the other plaintiffs in prior successful litigation (case no. 13-cv-851 and 881) against the NSA and other Government Defendants, including President Obama, have re-filed their class action demand in a new proceeding before the U.S. District Court for the District of Columbia. The new case which will be assigned to Judge Richard J. Leon as related, is the only class action lawsuit that has actually been filed against the NSA and other Government Defendants. It (case no. 14-cv-92) was filed to streamline the earlier cases, also before Judge Leon, which are on appeal with a petition for writ of certiorari soon to be filed. The writ, if granted, will allow the cases to leapfrog the intermediate appellate court and go directly to the U.S. Supreme Court. In the prior cases, Judge Leon found that the NSA's massive metadata surveillance on nearly all Americans without regard to their having any connection to terrorism, as "almost Orwellian" in its violation of Fourth Amendment rights. See new complaint at www.freedomwatchusa.org.

In filing the new class action, plaintiffs removed the class action demand in the earlier cases, and dropped the Verizon Defendants with the right to add them later, in order to speed up the case and move it into the discovery phase to prepare for trial. Accordingly, the original cases are now simplified, thus speeding up litigation, while the new class action can potentially entail a class of thousands if not millions of Americans as plaintiffs.

Klayman stated: "The on-going outrageous violation of constitutional rights should be adjudicated as fully and swiftly as possible, while allowing all aggrieved citizens to bring suit. The Government defendants, including the president, must be held accountable and these violations of constitutional rights must be brought to an end. As for Verizon and the other cell phone and internet providers who claim that they have no liability as they were acting under orders of the FISC or Justice Department, discovery in the on-going cases will test whether this is true. If not, they will be added to the cases at a later date."