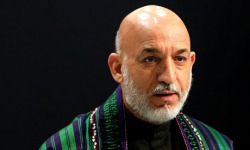 (Washington, D.C., March 19, 2014). Today, Larry Klayman, a former federal Justice Department prosecutor and founder of Judicial Watch and now Freedom Watch (www.freedomwatchusa.org), announced the filing of a lawsuit (1:14-cv-00435) before the U.S. District Court for the District of Columbia, charging Afghan President Hamid Karzai, his Afghan government, in concert with the terrorist group the Taliban and the terrorist designated country the Islamic Republic of Iran, with conspiring to shoot down a Chinook helicopter that carried 17 Navy SEALs, 5 special ops servicemen, 5 National Guardsmen and 3 Air Force members, on a mission code named Extortion 17. The deaths of members of Navy SEAL Team VI were quite a trophy given their heroic actions in killing master Al Qaeda terrorist and the man behind 9/11, Osama Bin Laden.

Klayman and Freedom Watch, who are representing some of the families of the fallen heroes aboard Extortion 17, issued the following statement upon filing suit:

"This case is not only intended to bring justice and thus closure to this tragedy, but to use the discovery process in court to answer many ignored questions about the causes of the crash. Thus far, the Obama administration has stonewalled the families and Congressional Committees investigating the deaths of these valiant heroes.

It comes as no surprise that Afghan President Karzai, based on all available evidence, was likely the ringleader who sold out the Navy SEALs and other servicemen. He is one of the most ruthless heads of state on the world stage today. Having likely been bribed, he has already met privately with terrorist groups and released hardened terrorist criminals in order to appease the Taliban, with whom he has been negotiating behind the back of the United States. As for Iran, it pays bounties on the heads of dead U.S. servicemen in Afghanistan and elsewhere, and is a staunch ally of the Taliban.

The families which I represent will not rest until justice is done."