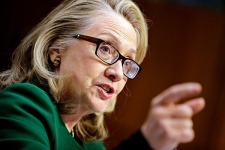 (Washington, D.C., August 6, 2013) Last week, Freedom Watch, led by chairman and former prosecutor for the U.S. Department of Justice, Larry Klayman, unveiled in a Freedom of Information Act lawsuit that Hillary Rodham Clinton is the likely leaker of classified state secrets to Washington New York Times chief correspondent David Sanger. There are unprecedented revelations, printed in the Times, that reveal the nation's cyber-warfare sources and methods against Iran's nuclear reactors and Israeli war plans among other classified leaks of sensitive information that severely harmed U.S.-Israeli national security. These leaks were perpetrated in the lead-up to the 2012 elections, when the Obama administration attempted to look tough in response to Republican charges that it was soft on Iran and was also attempting to thwart an Israeli attack on Iran. The information in the documents that State was ordered to provide Freedom Watch parallel Sanger's Times articles and his book. Hillary Clinton and her staff had access to national security briefings and the documents show that she was more than willing to cooperate and likely disclose highly classified information to Sanger.

Sanger's Times article is loaded with information detailing the American and Israeli secret sources and methods concerning cyber attacks on Iran's nuclear facilities with a computer virus that came to be known as Stuxnet. Senator John McCain commented on this: "I repeat, the administration officials discussed a most highly classified operation that is both highly classified and still ongoing, an operation that clearly was one of the most tightly held national security secrets in our country until now." Unfortunately, McCain let this issue drop.

Attorney Larry Klayman, however, refuses to let this issue become another scandal the Obama administration tries to play off as "phony": "Washington officials would like to see Manning and Snowden burn at the stake in a modern-day equivalent of the Salem witch trials, if for no other reason than to divert attention away from their own penchant to leak even more sensitive national security information for political purposes. Hillary Clinton and State are now implicated in perhaps the most damaging release of national security information since the Rosenbergs revealed atomic secrets to the Soviet Union in 1951, and they should be held accountable."

For more information or an interview, contact Freedom Watch at daj142182@gmail.com or Tel: (424) 274-2579. See documents at www.freedomwatchusa.org