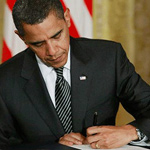 (Washington, D.C., January 30, 2013). Today, Larry Klayman, founder of Freedom Watch, announced that their complaint, filed in the U.S. District Court for the Middle District of Florida (Ocala Division) (5:13-CV-26-OC-22PRC), has been expanded. The original complaint (see www.freedomwatchusa.org), filed under the Federal Advisory Committee Act (FACA), the same law he used to take the Cheney Energy Task Force all the way to the U.S. Supreme Court for its having kept its meetings with energy lobbyists secret, and which he also invoked against the equally secretive Obamacare task force, which litigation remains in progress in federal court in Washington, D.C. (1:09-cv-02398-RWR), not only sought access to the Obama Gun Control Task Force's behind closed door meetings with special interests, but also seeks to enjoin implementation of any recommendations which flow from these meetings (the meetings violated the notice and document production provisions of FACA). (See http://www.politico.com/story/2013/01/gun-advocates-shrug-at-obamas-executive-actions-86329.html and http://www.wnd.com/2013/01/obama-sued-to-stop-gun-task-force/ ). This would include the executive actions which Obama announced after the first series of these meetings, the most recent of which occurred at the White House this week with sheriffs from various localities.

In addition to the prior request to enjoin implementation of Obama planned executive actions, the complaint was expanded today to add a count for Obama's failure to produce minutes of these meetings – which the advisory committee continues to refuse to produce – so the American people can see for themselves what lobbying influences are being brought to bear on Obama and Vice President Biden with regard to gun control.

"Obama and Biden promised the most open government in American history. Instead, we have seen a 'star chamber' mentality and approach. It's time that they both sobered up and respected the rule of law, as they are seeking to impose unwarranted and illegal executive actions on 'We the People' which infringe our Second Amendment rights. In light of the recent D.C. Circuit Court ruling that Obama had exceeded his executive authority with regard to an NLRB recess appointment, our case under FACA has even greater credibility. Obama's and Biden's executive actions as a result of these secret meetings are equally null and void as are the rulings of the NLRB," stated Klayman.