Freedom Watch's Citizens Grand Jury Has Indicted Biden for Manslaughter and Treason and Other Felonies
Indictment Embedded Below and at www.FreedomWatchUSA.org

Copy
(Thursday, September 23, 2021) Freedom Watch put Joe Biden before its Citizens Grand Jury TODAY. In previous sessions, evidence available in the public domain was presented to the grand jury and today he was indicted for Negligent Homicide, Involuntary Manslaughter, Reckless Endangerment and the Death of Vulnerable Children, Seditious Conspiracy, and Treason. The Citizens Grand Jury Indictment, which is embedded below and can be found at www.freedomwatchusa.org, speaks for itself. Now, we will convene a trial, where Biden will be called to answer for his deadly and reckless crimes that resulted in the deaths of seven Afghan children, 13 American servicemen and many others.

We the People, under the laws of nature and nature's God, as were invoked by our Founding Fathers in our Declaration of Independence on or about July 4, 1776, must reclaim our legal system, as the current compromised and corrupt systems in both Congress and the Courts will not mete out justice.

In sum, now that Biden is indicted, We the People will provide due process in the criminal prosecution of Joe Biden, seek his conviction before a Citizens' Court, and when successful — as the evidence against Biden is overwhelming -- seek a sentence of life imprisonment. We the People will then summon law enforcement and the military, all of which have also been harmed by Biden and his leftist allies, to enforce any sentence that will result from his criminal trial.

For information about the legitimacy of Citizens Grand Juries go to www.freedomwatchusa.org and order "It Takes a Revolution: Forget the Scandal Industry!" For instance, in the landmark case of United States v. Williams, 504 U.S. 36 (1992), writing for the majority Justice Scalia held that the grand jury belongs to the American people, not the three branches of government. This is the way the law was administered before Congress enacted the Justice Department in 1870, but the pursuit of "justice" by way of this increasingly compromised corrupt department in the executive branch is not exclusive.

For more information contact Asher Anderson at Asher.andersonfw@gmail.com if you wish to be considered to be a Citizens Grand Juror. To qualify you must not have a criminal record and swear to be impartial and non-political in your deliberations. 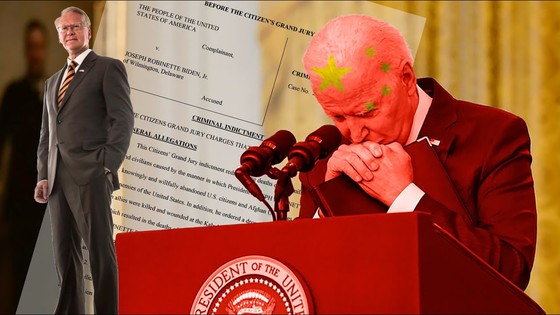