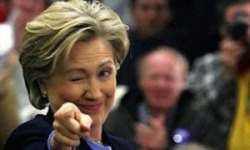 (Washington, D.C., July 5, 2016). Today, on news that the Federal Bureau of Investigation (FBI) has stated that it will not recommend prosecution of Hillary Clinton for the illegal use of her private email server while Secretary of State, Larry Klayman, a former federal prosecutor and founder of Judicial Watch and Freedom Watch, had this comment:

"As I have said and written repeatedly, the legal system is corrupt to the core. It favors the establishment and covers up its misdeeds – by both Democrats and Republicans. It is a club that divides up the riches and shares power at the expense of the people, much like the National Football League has the American and National conferences.

"This latest example of how the elite protect each other comes as no surprise. Had FBI Director Comey recommended prosecution, his career would have been over. The Democrats could have blocked any future appointment. While Comey has more integrity than most for a government official, he would have been frozen out of official Washington had he taken strong action, particularly in the face of President Barack Obama's endorsement of Hillary Clinton. Personal interests thus likely took precedent over the state of the nation.

"Stack this up with the role of the courts, which have largely run interference for Hillary Clinton, and the Clintons – both Hillary and Bill Clinton – are now free to ascend to their throne once again, selling everything in The White House that they can get their hands on as they did largely with the Chinese in the 1990s. They have a long history and pattern of illegality, as I uncovered during their administration. Indeed. FBI Director Comey's statement today did not concern her sale of State Department access for money, which is likely documented in her erased and deleted emails on her private server. Even Judge Emmet Sullivan, the only judge who has allowed for discovery of Hillary Clinton's scam to hide email at the State Department, cleverly delayed the commencement of discovery long enough to allow for Hillary Clinton to be cleared by the FBI and win the Democratic presidential nomination. Then, when the discovery eventually got underway, contrary to law and accepted practice he would not allow for video depositions to be released publicly, and effectively allowed Clinton confidantes to make bogus objections to questions and improperly take the 5th Amendment. Thus, while Sullivan had a bit more integrity than other Democrat-appointed judges who have been presiding over similar cases, he cleverly delayed long enough to allow Hillary Clinton to get off scot free.

"The bottom line is this: the citizens of this country have again been betrayed. This is our final lesson that change will not come through the legal system, but that the nation is indeed in a revolutionary state. While I pray for a non-violent revolution, the die is now cast and we without any doubt are back to 1776, ironically one day after the nation celebrated Independence Day on July 4th."