Copy
Young Female Trump Supporter Brutally Assaulted By "Leftists" Allegedly Enabled by UC Berkeley, Financed By George Soros, and Facilitated by the Inaction of the Campus Police, Who Are Alleged to have Acted and Continue to Act Illegally By Inciting Violence 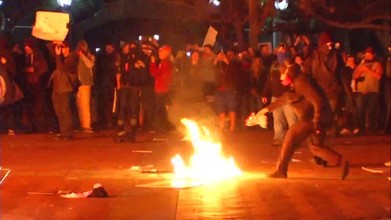 (San Francisco, California, June 6, 2017). Today, Larry Klayman, the founder of Judicial Watch and Freedom Watch (see www.freedomwatchusa.org), and a former prosecutor of the U.S. Department of Justice, announced the filing of a civil lawsuit in the federal court in San Francisco (17-cv-03235) alleging the brutal assault and other causes of action that resulted in extreme damage to a young gay woman, Kiara Robles, who was simply attending a speaking event to hear an investigative reporter of Breitbart News, Milo Yiannopoulos. The alleged assault was widely broadcast in California, nationally and internationally. See http://abc7news.com/news/pepper-sprayed-woman-says-she-was-hit-with-flag-poles-at-protest/1735116/ and https://twitter.com/janeygak/status/826998516144697344

The complaint joins as defendants the Regents of the University of California, Berkeley, its President Janet Napolitano, the Berkeley Police Department, Nancy Pelosi, George Soros, and others and alleges a number of causes of action, including civil rights violations, First and Fourth Amendment violations, equal protection violation, negligence, gross negligence, premises liability, negligent infliction of emotional distress, intentional infliction of emotional distress, assault, battery, and violations of the Bane Act.

Joining Larry Klayman as local counsel is Michael Kolodzi, an attorney admitted in the U.S. District Court for the Northern District of California. Mr. Klayman will be filing an application pro hac vice.

The complaint can be found at www.freedomwatchusa.org. Klayman had this to say on the filing of the lawsuit:

"Kiara Robles is a brave woman who was assaulted and severely harmed for simply exercising her constitutional and other rights. This cannot be permitted in civilized society, and that is why she courageously brought suit. It's time that the vicious and destructive actions of the left and its enablers such as UC Berkeley are held to account. Thanks to Kiara, justice will be done and these alleged destructive acts, which have been seen across California and the nation, as mostly recently in Portland, Oregon, just last weekend, will cease."

"Wherever you have official knowledge you have official truth. If public universities cannot remain politically neutral while receiving public funding, we have to separate universities and the state. College campuses are an indoctrination camp for political correctness. We must communicate with civility without defaulting to racism, sexism, bigotry, or whoever pays the most for political violence wins."