Dallas Sergeant Demetrick Pennie and Larry Klayman ask court for emergency hearing over death threats allegedly furthered or made by defendants in lawsuit against Farrakan, Nation of Islam, Sharpton and others to stop violence against police and other law enforcement officers 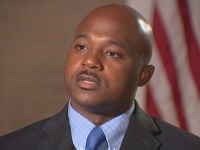 Pennie and Klayman Decry Black Police Association of Greater Dallas Plans To Hold Press Conference with Nation of Islam and Others Who Incite or Condone of Violence at 11 am Friday September 23, 2016, at 211 Centre Street, Dallas, Texas 75208.

(Dallas, Texas, September 22 and 23, 2016). Today, Sergeant Demetrick Pennie and Larry Klayman, plaintiffs in a class action lawsuit filed in the U.S. District Court for the Northern District of Texas (Pennie et. al v. Farrakhan et. al, Civil Action No. 3-16-cv-02010-1), filed a motion asking the court to hold an emergency hearing to seek redress concerning recent death threats which allegedly were either furthered or instigated directly or indirectly by the Defendants. Pennie and Klayman request that this emergency hearing be held this Tuesday, September 27, 2016. A copy of the motion is embedded below and can also be viewed at www.freedomwatchusa.org.

Given that Defendants Farrakhan of the Nation of Islam and Sharpton have called for the killing of law enforcement, these Defendants are allegedly directly implicated in this call for more violence, as the motion sets forth. So too are the other Defendants, including but not limited to Black Lives Matter, the New Black Panthers Party, and George Soros (who allegedly finances this violence), all supported by Defendants President Barack Obama and presidential candidate Hillary Clinton for their political ends. See Amended Complaint at www.freedomwatchusa.org.

To add insult to injury, the Black Police Association of Greater Dallas incredibly will hold a press conference this Friday apparently opposing plaintiffs' lawsuit and has even invited Tyrone Muhammed, President of the Nation of Islam Mosque #48 in Dallas, as well as other groups that have incited and/or condoned violence against law enforcement.

Sergeant Pennie had this to say about the press conference to be held by his fellow officers:

"That the Black Police Association of Greater Dallas would associate with the Dallas leader of Farrakhan's Nation of Islam, and others who stand for or condone violence, is an absolute outrage. These fellow police officers should be ashamed of themselves and if they do not reconsider their association with Farrakhan's the Nation of Islam in my opinion they should also consider forfeiting their oath of office, as they no longer represent law enforcement and the good people of Dallas, whatever their color, religion, race, ethnicity or creed."

The press release of the Black Police Association of Greater Dallas is also embedded below.

Dallas, TX — September 21, 2016 – The members and leadership of the Black Police Association of Greater Dallas offer our prayers, condolences, and deepest sympathy to the family of Mr. Terrence Crutcher of Tulsa, Oklahoma. His death reminds us of the tremendous amount of work still necessary to bridge the gap (real and perceived) that exists between law enforcement and the black community. As an organization of professional police officers, predominantly black, it is our moral duty to do our part in preventing the needless death of anymore unarmed people of color; and yes, that moral duty does extend to all human life regardless of color, but there is an epidemic of unarmed black men being shot by police officers. It is so pervasive, if not checked it will soon rise to levels exceeded only by lynchings, and slavery. We reference Dr. Martin Luther King in his eloquence directed to America, "We can never be satisfied as long as the Negro is the victim of the unspeakable horrors of police brutality." It is time to jog our consciousness and stop this epidemic from spreading; we cannot continue to have innocent lives lost. We are at a pivotal moment in history, where we must take the opportunity to change policing forever. If we make the radical changes necessary, we as a nation survive. If we fail, it is conceivable, that similar to the biblical cities of Sodom and Gomorrah, we start our descent to destruction as a nation. As black police officers, we are expected to perform our duty at times when one would believe that we are forced to choose between two sides. One side tells us remaining silent on this issue is necessary to survive in this profession, the other tells us to speak up loudly if we are to survive in our ethnic community. As black officers we will choose the side of right and use all of our energy, time, expertise, and funds to render this epidemic officially over. Until it ends, nothing can shield one from the possibility of becoming a hash tag in the long list of senseless acts of this nature. Education, character, college degrees from prestigious institutions, walls of awards/citations, and talent won't shield one from the hash tag list.

Disrespect and verbal assaults hurled at social justice organizations like Black Lives Matter are not the answer. We should be inviting them to the table to reach solutions. Lawsuits that list defendants like our nation's leader President Barack Obama, former Secretary of State, Hillary Clinton, Nation of Islam leader, Louis Farrakhan, former Attorney General, Eric Holder, and more are not bridges across that gap, the gap widens. Violence is not the answer, trust building is a start. We lost friends and colleagues that were among the officers killed in Dallas. This senseless act of violence was not the answer, nor does the answer lie in the loss of life of the many unarmed black men, who we seem to awaken to on a morning basis all too often.

Please join us for a community press conference — Friday, September 23, 2016.

Purpose: Comprehensive Steps to Address the Gap between Law Enforcement and the Black Community