Copy
(May 12 2022) Larry Klayman, Esq., the founder of both Judicial Watch and now Freedom Watch, former federal prosecutor and current chairman and general counsel of Freedom Watch and its Citizens Prosecutor, has announced that he will seek the indictment of Josh Gerstein, the head Politico legal reporter who is alleged to have conspired and participated in the theft of the draft majority opinion of the U.S. Supreme Court purporting to overturn Roe v. Wade, the ruling which created the so called right to an abortion.

A copy of the draft indictment against Gerstein is embedded below. The indictment sets forth the facts and the legal bases for Gerstein indictment.

If the indictment is returned, and we are confident given the strength of the facts and the law that it will be, Gerstein will be prosecuted in a citizens' court.

Klayman had this to say about Gerstein's imminent indictment:

"Josh Gerstein is a radical member of the Marxian Jewish left who conspired to sow division between the sexes and destabilize further the nation, which has all but been destroyed in the year and a half since the left has effectively seized control over our body politic. As a Messianic Jew, that is a Jewish Christian, I am disgusted by his Marxist godless actions, which put life and killing unborn babies second to political control. The overwhelming majority of Jews despise all that Gerstein stands for, which is not Jewish at all — much like his self-hating Jewish comrades George Soros and Bernie Sanders.

"Gerstein's obvious motivation in the alleged theft and then wide publication of the draft Alito majority opinion is not just to influence upcoming mid-term elections in favor of leftist Democrats running to be reelected or for office for the first time, but to sow mayhem and destruction among the citizenry. He is a despicable and dishonest person and should not be shielded from criminal prosecution because he professes to be a journalist.

"Gerstein's long history in attempting to harm conservatives and conservative interests is well known, along with his publication Politico, which does the bidding of the left and now the Biden-Harris regime. Indeed, Mr. Klayman has litigation against him pending over claims of defamation in conjunction with the District of Columbia Bar disciplinary apparatus, which like Gerstein is leftist and dedicated to destroying conservative legal advocates like Kellyanne Conway, former AG Bill Barr, Rudy Giuliani, Sidney Powell, Ted Cruz and Josh Hawley, to name just a few. In short, Gerstein is an integral part of the war against conservative and conservative principles, such as the right to life, by the left."

For more information about our citizens grand juries and trials, go to www.freedomwatchusa.org. You may also contact Larry Klayman at leklayman@gmail.com or call 424-335-5646 to be in contact with his executive assistant. 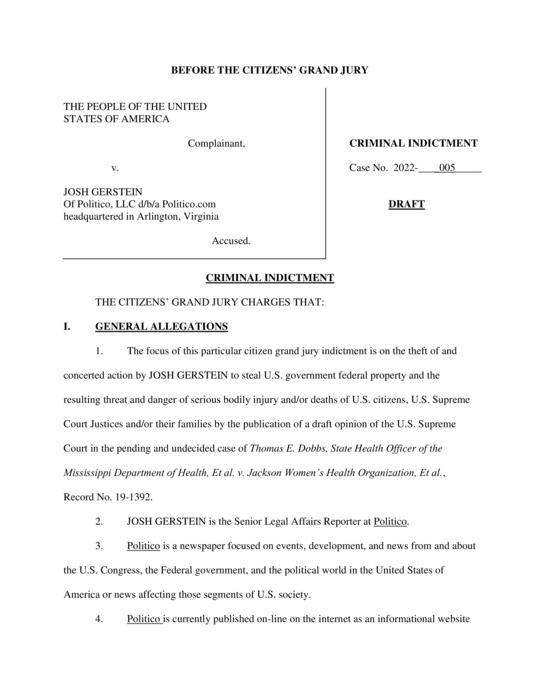