Klayman: Black Obama Federal Judge Sent Her to Jail Because She Boasted About Being White!
Order "It Takes a Revolution: Forget the Scandal Industry!" at BarnesandNoble.com 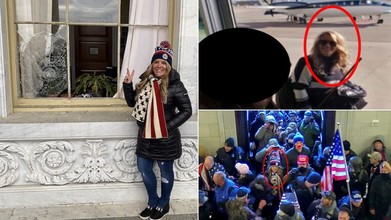 Capitol Rioter Who Boasted She Wouldn't Go to Jail Because She's White Is Going to Jail
By Zoe Richards
The Daily Beast
November 5, 2021
A Texas real estate agent who swore she wouldn't be jailed over her role in the Jan. 6 Capitol riot has been sentenced to 60 days in prison.

U.S. District Judge Christopher Cooper on Thursday also slapped convicted rioter Jenna Ryan with $500 in restitution after she was charged with a single count of parading, demonstrating, or picketing in a Capitol building.

At the hearing, Cooper told Ryan that he believed her punishment would tell Americans "something about the courts and about how our country responded to what happened, and I think the sentence should tell them that we take it seriously."