Biden Tries to Shift Blame on Afghanistan
Order "It Takes a Revolution: Forget the Scandal Industry!" at BarnesandNoble.com 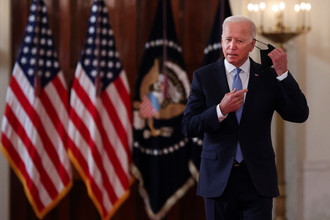 By Alex Thompson, Christopher Cadelago
POLITICO
September 1, 2021
President Joe Biden said Tuesday that he took "responsibility" for his decisions on Afghanistan. As for any mistakes made — well, he offered plenty of potential culprits.

The hundred-plus American citizens who didn't make it out? They were notified 19 times "with multiple warnings and offers to help them leave Afghanistan, all the way back as far as March," he said, adding that most of them were dual citizens, anyway.

The fall of Kabul, far earlier than most intelligence and military advisers predicted? Biden pointed the finger at the Afghan army and said he'd instructed his team to prepare for that eventuality. Plus, he had to withdraw quickly because of the deal his predecessor, former President Donald Trump, cut last year with the Taliban. And some errors were simply unavoidable, he argued. "The bottom line is, there is no evacuation from the end of a war that you can run without the kinds of complexities, challenges, threats we faced," Biden emphasized in a roughly 30 minute White House address. "None."