Copy
Arpaio and Klayman Were First to File Suit in U.S. District Court for the District of Columbia 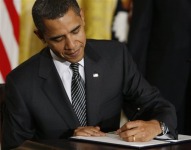 (Washington, D.C., December 4, 2014) Today, in response to President Obama's announcement of November 20, 2014, that he on his own authority will grant legal status in the United States to approximately 4.7 million illegal aliens, Sheriff Joe Arpaio of Maricopa County, Arizona and his crime-fighting attorney Larry Klayman, have filed a complaint and preliminary injunction motion with the U.S. District Court for the District of Columbia seeking to enjoin or stop this illegal action by President Obama. (See www.freedomwatchusa.org.)

Sheriff Arpaio's attorney, Larry Klayman, founder of Judicial Watch and Freedom Watch, and former federal prosecutor, is quite familiar with preliminary injunctions as he recently succeeded in enjoining the National Security Agency from illegally spying on American citizens who have no ties to terrorists or terrorism. (Klayman v. Obama (13-cv-00851)).

"Obama's form of amnesty violates the U.S. Constitution, plain and simple. The President does not have the authority to rewrite immigration laws as legislation and national policy are enacted by Congress, not by the President. The President's executive responsibilities are to execute – that is implement – the laws enacted by Congress. As Sheriff Arpaio's attorney and friend, I salute him for being the first to boldly challenge President Obama's unconstitutional executive order effectively granting amnesty to illegal aliens, some of whom are hardened criminals. As he stated under oath in his Declaration, Sheriff Joe Arpaio attests that he 'found out that over 4,000 illegal aliens were in our jails over the last 8 months . . . [and] one third of the 4,000 illegal aliens arrested in Maricopa County had already been arrested previously for having committed different crimes earlier within Maricopa County under Arizona Law.' This must not be tolerated and must be stopped."